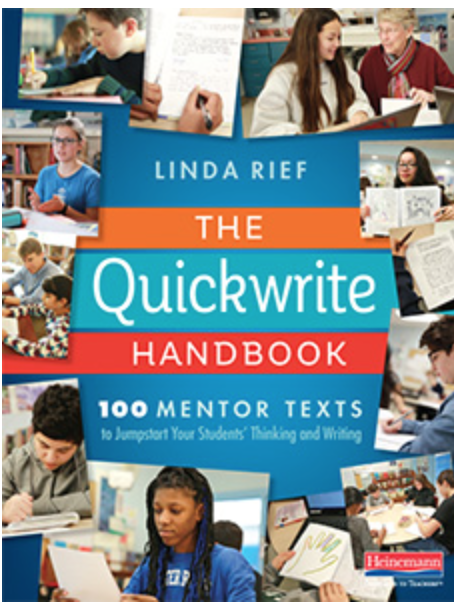 What are quickwrites?  They are quick 3 minute bursts of writing done in response to poem, short text, question, picture or video.  They can be used to get students thinking about a topic, theme, genre or author’s craft.  The writing springs from the pen and the only rule is to keep writing.  The writing could mirror, be inspired by or pick up on a thread of an idea.  What happens when you give students three minutes to write is that students create writing “nuggets” that may be mined later and developed into longer pieces.  They become more confident and fluent writers.  Sometimes, in those three minutes, they create magic.

Here is a poem that emerged from a quickwrite done by my student after listening to George Ella Lyon’s “Where I’m From.”    We had been studying several notable civil rights heroes and students where asked to imagine where they were from.

I’m from a southern church

With “White Only” signs

That made me feel sad.

I’m from a mother

“You are as good as anyone.”

I’m from a place where

I wanted to play with my white friends

But their mothers said, “No,

Because you are black.”

I am from sadness.

I am from a place where

I am from a place where

I will make a world where

with little white boys and girls.”

Having seen the power of quick writes, I am always on the lookout for new inspirations to add to my collection.  Linda Rief, the patron saint of quickwrites, has published a new book, The Quickwrite Handbook:  100 Mentor Texts to Jumpstart Your Students’ Thinking and Writing.

Each mentor text (short poem, short text or picture) is accompanied by some suggestions to share with your students, such as “write about anything that the piece brings to mind”, “borrow a line and write wherever the line leads” or asking them to respond to the piece’s central theme (“Think of a time you did something you probably should not have done, but did it to impress someone else.(p.84)”

Student writers’ work is featured alongside professional writers and “interludes” show examples of final drafts that emerged from quickwrites.

I am looking forward to exploring these quickwrites during my own morning writing time and then sharing them with my students.

I'm a Literacy Specialist with over twenty years of classroom, staff development and family event experiences. View All Posts